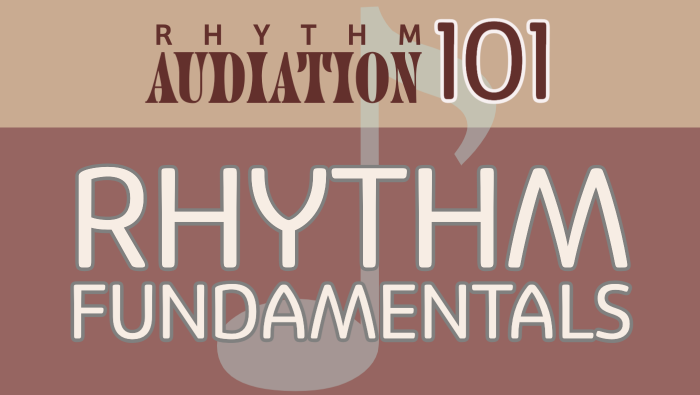 Once we can successfully move to macrobeats and microbeats simultaneously, and echo patterns at the Aural/Oral level, it’s time to label the patterns with a Verbal Association.

In language, we don’t need this step because we can visually see the object (Mommy, Daddy, bottle) or label it as a feeling or emotion (happy, sad, angry). In music, we need an extra step to label and organize the sound we hear.

The most effective system for labeling the layers of rhythm is the Beat-Function Rhythm Solfege system developed by Edwin Gordon and James Froseth.

To begin to use this syllable system, we only need to label macrobeats and microbeats in duple and triple meters.

Macrobeats, regardless of meter, will get the syllable “DU” (pronounced “Doo”). Microbeats get different syllables based upon meter.

Notice that the first syllable of the microbeat is the same syllable as the macrobeat. This allows one to hear the rhythm syllables based upon beat function.

Later, as we begin to read music, you’ll see that this syllable system works in all time signatures. It is based on how music is felt first in the body, rather than how it is notated. Music, after all, is an aural art first, and a written art second.

As stated, when you audiate “DU DE” as the microbeat, the music is in duple meter. Chant this to yourself:

Watch the video for Lesson 4 above to see how to echo patterns. Then, listen to and echo the patterns chanted on the following Patterns-Only video. Use rhythm syllables.